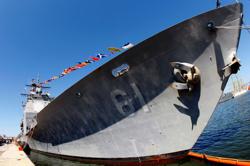 A man wearing a surgical mask is pictured in the heart of the Bahraini capital Manama. With Qatar confirming its first Covid-19 case, it means Saudi Arabia is now the only Gulf state not to have signalled any coronavirus cases. - AFP

DOHA: Qatar reported its first case of coronavirus infection in the country on Saturday (Feb 29).

The patient is a 36-year-old Qatari who recently returned from Iran, the health ministry said in a statement, adding that he is a stable condition.

It means Saudi Arabia is now the only Gulf state not to have signalled any coronavirus cases.

The country most affected by the outbreak in the Gulf region is Iran, with 43 deaths and nearly 600 hundred confirmed infections, according to authorities.

The majority of infections in other Gulf countries have been linked to visits to Iran or involve people who have come into contact with people who had been there. The only deaths reported so far in the region are in Iran.

Bahrain's health ministry said on Twitter on Saturday that three more cases were discovered for citizens who came to the country via indirect flights from Iran, raising the total number of confirmed infections to 41 cases.

The United Arab Emirates advised banks to reschedule loans and reduce fees and commissions on Saturday as part of measures to mitigate the economic effects of the coronavirus outbreak.

The UAE is a regional business hub and major transit point for passengers travelling to China and other destinations in Asia.

Kuwait has called on its citizens to avoid travelling over concerns about the spread of the coronavirus. {nL8N2AT0GC]

Death toll rises as violence rocks Gaza, Israel and West Bank
BTS makes cover of 'Rolling Stone' magazine, the first all-Asian act to do so
Ships from India not required to undergo 14-day quarantine, says Marine Department
Wider vaccination and herd immunity are vital to the recovery
Curfew in eastern Sabah waters extended to May 30
Top Glove reiterates commitment to work closely with US CBP to resolve WRO, finding
Covid-19: Perak has highest infectivity rate
Thwarted – e-hailing driver's bid to smuggle illegal who misses her husband past a roadblock
Malayan Cement buys YTL's cement biz for RM5.16b
Fuel prices unchanged from May 13 to 19