Now she has gone on to bare her body - for the first time - to shoot a bed scene in Toggle series Last Madame.

In an Instagram post on Sept 26, Peh, 36, revealed that though explicit nudity will not be shown, the demanding scene still got under her skin.

Peh, whose character is a brothel boss in the 12-part series, admitted that she was nervous over whether she could pull off the emotionally-fraught scene, which is her most daring in her acting career to date.

Wrote Peh, who married actor Qi Yuwu in 2014: "It was a big step for me as an actress to go bare in front of the production crew and my fellow actor."

"But I decided to do this because the context of the story and character motivations were fully justified," she added, mirroring a recent decision by photographer Chuando Tan, 53, to strip for a movie for the sake of the story.

"It wasn't just about love-making, it was my character learning to love and trust again, and a transitional milestone for both our characters. I had full trust in my co-star @ijeffchou, respect for my director and confidence in the camera crew," Peh added.

Still, she said it took her "a long time to decide if I would go nude... A story set in a brothel in the 1930s, we can't shy away from sex. The tension between my character and Inspector Mak began the moment we met and the flirting continued.

"It was bound to happen, it was just a matter of when and where."

The sex scene was not easy too for Taiwan model Jeff Chou.

In an online post, he described the experience as "nerve-racking" and one that made him feel "incredibly vulnerable".

"Asking us to bare it all was a big deal but we believed in the vision and wanted to take the story deeper to tell how two people could learn to love under impossible conditions.

"I preoccupied myself with workouts to keep in shape while juggling a busy filming schedule - in the end, it was my mindset that needed to be changed."

Peh is happy with the work they put in, writing: "Showing two bodies moving in unison captured the passions and inner conflict of the two characters so vividly, it pushed the show to a different level."

But how did her hubby react to the demands placed on her for the drama?

According to Toggle, Peh said: "When I got home after filming the bed scene, my husband asked me how it was, and I said: 'It was okay. Like that lor.'

Peh added that she had told him in advance about the steamy scenes but "I think he's also like, 'Aiyah, how far could it possibly go?' So I don't think he minds."

In a column in Lianhe Zaobao on Sept 27, Peh said she had not been involved in any kissing or intimate scenes after her marriage, not because she objected to them, but because these were not required in the plot.

But while she is glad she took up the Last Madame challenge, she wished that footage of her and Chou fully nude in bed could be shown, instead of the cameras zooming in on their facial expressions.

Peh felt that this tack reduced the impact of the story as well as the desire and conflicts felt by the characters.

She asked readers what type of movie Lee Ang's Lust, Caution (2007) would be if viewers saw only the facial expressions of stars Tony Leung Chiu Wai and Tang Wei, instead of the actual explicit sex scenes shown on screen, and whether people would still like the film.

Last Madame, an English-language drama which premiered on Toggle on Sept 26, is rated M18. – The Straits Times/Asia News Network 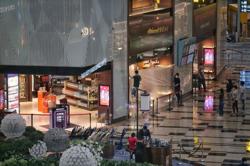