Beijing: An HIV vaccine being developed by Chinese scientists will be given to 160 volunteers in a second-phase clinical trial, a scientist at the Chinese Center for Disease Control and Prevention said.

The candidate vaccine, DNA-rTV, relies on replication of the DNA of HIV to stimulate effective immunisation, according to Shao Yiming, a chief HIV researcher at the centre.

He said the vaccine, based on the one used to prevent smallpox, is the first such HIV vaccine to begin a second-phase clinical trial.

“With significant reduction of virulence, the vaccine will not cause infection in healthy receivers,” Shao said.

The vaccine under development does not contain the full human immunodeficiency virus. Rather, it contains DNA segments from HIV so it will not cause an infection.

The HIV DNA will keep replicating during the initial period of injection of the vaccine, so it will constantly stimulate the immune system to produce antibodies, meaning the effect will be stronger and longer lasting. This is similar to how vaccines for some other diseases work.

Most of the other HIV vaccines under development in China and abroad are inactivated vaccines, which do not include HIV DNA that can replicate, so they will not produce a long-lasting immunisation effect. — China Daily/Asia News Network 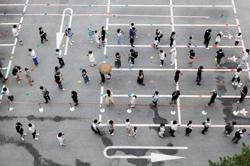