Two teachers walk past tiles which fell off the damaged roof of a school building after a earthquake hit the area in Jimbaran on Indonesia's resort island of Bali on July 16, 2019. - A strong 5.7 magnitude earthquake struck off the Indonesian holiday island of Bali on July 16, the United States Geological Survey said, causing residents to flee their homes and damaging several buildings. (Photo by SONNY TUMBELAKA / AFP)

The quake, which had a magnitude of 5.7, hit at 7.18am local time yesterday and was centred 82.1km southwest of the island’s capital Denpasar, according to the USGS.

The tremor, which was felt as far away as Banyuwangi on the neighbouring island of Java, struck relatively deep at 91km and no tsunami warning was issued.

Residents of Bali described panic as the quake hit.

“I was carrying my baby when I felt the jolt – it was strong, I ran outside immediately and saw many people were already fleeing to the street,” said Denpasar resident Ko­­mang Sudiani.

“We have received reports of damage such as fallen roof tiles and broken glass in several houses and offices,” Rahmat Triyono, the head of the agency’s earthquake and tsunami division, said in a statement.

More than 20 homes, schools, temples and offices were moderately damaged by the tremor, predominantly in Badung district, near the tourist hub of Kuta, Bali authorities said yesterday.

The national disaster agency posted photos on its Twitter account showing a damaged house and mosque in Banyuwangi in East Java and a damaged Hindu temple in Bali. Video showed damage to an ornate entranceway in Nusa Dua, an area home to high-end resorts in Bali.

The main hospital in Denpasar evacuated patients, some attached to intravenous drips, to the hospital grounds, television footage showed. Numerous schools and hotels were also evacuated.

He said guests fled the hotel in panic but returned after about 15 minutes.

So far, no casualties have been reported in the disaster.

Indonesia experiences frequent seismic and volcanic activity due to its position on the Pacific “Ring of Fire”, where tectonic plates collide. 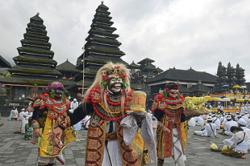 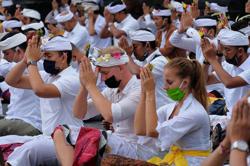