Rohingya: Our lives are worse than animals

Drifting in limbo: Rohingya migrants in a boat drifting in Thai waters off the southern island of Koh Lipe in the Andaman Sea. — AFP

SITTWE (Myanmar): Five years have passed since Hla Hla Sein was forced into a displacement camp in western Myanmar for Rohingya Muslims, where disease and deprivation are rife and armed guards patrol a barbed-wire perimeter.

But after a crackdown on the international smuggling routes that once offered a dangerous – but viable – escape route, she now sees no way out.

“We have no idea how many years we will have to live like this,” the 40-year-old widow said inside the tiny bamboo hut she shares with her son, tugging nervously at her purple headscarf.

“Our lives are worse than animals ... we are human only in name.”

Deadly sectarian riots in 2012 drove more than 120,000 Rohingya into the camps in Rakhine State, where they live in ramshackle homes and are deprived of adequate food, schools and doctors.

For years human traffickers cashed in on the group’s desperation, ferrying thousands of Rohingya across the Andaman Sea to countries like Thailand, Indonesia and Malaysia.

The journeys were defined by danger: from rickety boats on high seas to abuse and even death at the hands of the gangs, who held many victims for ransom in jungle camps on the Thai-Malaysia border.

That route was shuttered by Thailand’s junta in 2015 and few boats have left the camps since, according to residents, aid workers and migration experts.

The move may have spared Hla Hla Sein death at sea or abuse at the hands of smugglers, but it also cut off a way out of a painful limbo.

Hla Hla Sein and her son had tried to escape to Malaysia before the crackdown, but their boat was so overcrowded it started to sink a few hours into the journey, forcing the captain to turn back.

It was only after they returned to shore that she found out the smugglers had planned to sell them as slaves at their destination.

“I was ready to die at sea as we have nothing in this country,” she said.

“Our children cannot get education, even I cannot work. I thought dying would be better.”

Buddhist-majority Myanmar has long been chastised for its treatment of the Rohingya, a group of more than a million Muslims whose rights and freedoms have been successively stripped away since the early 1980s. — AFP 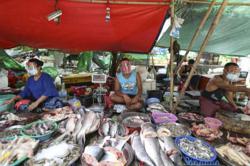