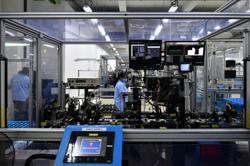 THE first time Asia Pacific Breweries executive Chia Teck Leng met the woman who would become his girlfriend, he won S$1mil (RM2.2mil) from her at the gambling table.

It was April 2002 and Li Jin, 22, a Chinese national, was then a croupier in the VVIP room at the casino on board a cruise ship.

Subsequently, whenever he went on board to gamble, finance manager Chia, 44, a married man, always asked for his “good luck charm”.

True enough, he won whenever he played against her. So frequent were her losses to him that eventually, she was given a day off whenever Chia came on board.

Li, from Jiangsu and a Nanjing University graduate, later left her job to be with Chia in Singapore.

Li’s lawyer, Edmond Pereira, gave an account of the couple’s relationship in a district court on Thursday, where she faced charges of using a forged passport to enter and leave Singapore.

She pleaded guilty to three charges and had five other charges taken into consideration.

Chia stands accused of using forged documents to cheat four banks of more than S$117mil (RM258mil) between 1999 and 2002, in what the prosecution has called the “biggest case of financial fraud in the history of Singapore.”

The fake passport was found when the Commercial Affairs Department raided her Grange Road apartment while investigating Chia.

The court heard that Li had had a valid China passport and was already using it to travel to Singapore and Australia with Chia.

Chia later applied for an employment pass for her through IT company Business Continuum Solutions, which he set up.

She used the passport between Nov 12, 2002 and Jan 9 last year. She later travelled to Malaysia, Australia, England and Cambodia on her own passport.

District judge Jasvender Kaur accepted Pereira’s argument that the fake passport was used only as a temporary measure, to enable her to be with Chia. She also accepted that Li should not be penalised just because she was associated with Chia.

However, using a forged passport was a very serious offence, she said, as she jailed Li for six months.

The sentence was backdated to Dec 12 last year, when she was remanded. With a one-third remission, she is expected to be out of jail in a month’s time. – The Straits Times/Asia News Network