The 61-year-old actor-singer was seen sitting among other parents in a school hall as he intently watched 11-year-old Hanna perform on stage.

Excited parents eagerly took photographs of the celebrity and posted them online.

“He can be said to be a competent celebrity dad who sends his daughter to school and attends her school activities.

“He should be a role model for other fathers!” one Internet user wrote.

Hanna is the only child of Lau and his wife, Malaysian model Carol Chu, 56. The actress and her rock star husband were photographed holding each other’s arms on an outing.

Zhang was even seen placing her head on Wang’s shoulder.

“This is how I imagined the most beautiful marriage to be!” one fan wrote.

Talk about their marriage being in trouble surfaced after the couple sold their stakes in a company.

Zhang and Wang, a two-time divorcee, got married in 2015 and have two children together. 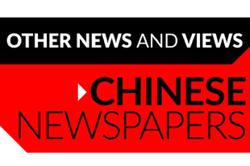