BUTTERWORTH: Acting on a tip-off, the Penang Customs Department assisted by the Port Klang Container Control Unit seized 7.9 million sticks of smuggled cigarettes worth RM630,400 with unpaid duties of RM5mil when they raided a container in Port Klang, Selangor on Nov 22.

Penang Customs director Hamisan Kalip said initial investigations revealed that the container was handled by a Kuala Lumpur-based shipping company with a branch in Port Klang.

He said that based on the documents the illicit goods were believed to have originated from China and investigations are in progress to identify the suspect involved in the smuggling activity.

“The container was brought to the state customs enforcement division complex for further investigations," he said at the state Customs Enforcement Complex in Prai near here on Friday (Dec 9).

Meanwhile in another unrelated incident, a team from the custom enforcement division raided a container at the North Butterworth Container Terminal (NBCT) here at about 4pm on Oct 21.

Hamisan said upon inspection of the container, the raiding party found 1,300 units of induction cookers worth RM910,000 with unpaid duties amounting RM291,200.

He said initial investigations revealed the products were imported by a local company based in central Seberang Prai and the consignment came from China.

“A 54-year-old man was detained to facilitate investigations and was released on bail.

“The modus operandi was to declare the trade as 32 different parts of the induction cooker that have not yet been assembled where these declared items benefit from full tax exemption and do not require an import license. 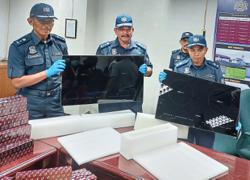