KUALA LUMPUR: The 30m-high landslide at the residential area in Taman Mega Jaya, Ampang, was believed to have been caused by an underground water pipe leak.

Selangor Fire and Rescue Department director Norazam Khamis told Bernama they received a call about the incident at 2.48pm and dispatched seven firefighters from the Pandan fire station, who arrived at the scene 12 minutes later.

“There were no victims or damage involving house structures. The nearest house was about 20m away from the landslide area,” he said in a statement yesterday.

He added that they were still monitoring the situation and that Indah Water Konsortium was conducting maintenance work. 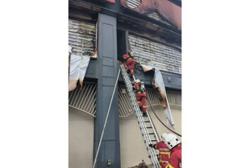