He said that this caused Pahang Barisan Nasional to go with Pakatan Harapan instead.

The Pahang Barisan chairman said that he received a phone call from state Pakatan chairman Datuk Seri Amirudin Shari after the 15th General Election (GE15) who offered to form the state government without any conditions.

"I was alsp contacted by Perikatan representatives who wanted to meet. The first words out of PAS deputy president Datuk Seri Tuan Ibrahim Tuan Man was that Tan Sri Muhyiddin Yassin has agreed to appoint me as a senator and full minister," said Wan Rosdy.

"I was quite surprised because the government had not been formed yet. How could he make that offer," he added.

Wan Rosdy said that Perikatan also wanted the mentri besar and speaker posts as well as a balanced executive council.

"They wanted to appoint three assemblymen too. The way I saw it, they were not there for a discussion. They were setting terms," Wan Rosdy said at a ceramah in Rompin on Wednesday (Nov 30) night.

Wan Rosdy said he then told Tuan Ibrahim of Pakatan's unconditional offer, which surprised the latter.

"The next morning, he texted me saying that after discussions, they agreed for me to be reappointed as mentri besar," he added.

Wan Rosdy then said that he was surprised because he felt that is not up to them to appoint me.

"That is under the consent of the Yang di-Pertuan Agong (who is the Sultan of Pahang). The rest of their conditions remained. I continued talks with Amirudin and our goals were similar, to maintain peace, stability, prosperity and to form a government for the people," he said.

Wan Rosdy said he knew he could be removed anytime as mentri besar if Barisan went along with Perikatan's conditions due to their numbers in the state assembly.

He added that the state government would have never been formed if Barisan did not make a move.

"Before they (Perikatan) even formed the government, they were already asking for the office of village development and prosperity committees, the keys to town halls, this and that.

"We imagine that if they formed the government, stability, prosperity and peace would have been second and third on their agenda," said Wan Rosdy.

He said that even after agreeing to form a unity government with Pakatan, Barisan still offered one exco post to Perikatan but it was rejected.

Wan Rosdy thanked Amirudin, who is the Selangor Mentri Besar, for Pakatan's willingness to join hands with Barisan to continue the state government's agenda for the people.

"I needed to explain this because I have been accused as though I was unwilling to be with them (Perikatan). We ended up not going along with them because they imposed strict conditions which would have made it difficult to govern the state," said Wan Rosdy.

Pahang ended up with a hung assembly after GE15 as none of the three coalitions secured the simple majority to form the state government on their own.

It was then announced last Sunday (Nov 27) that the Regent of Pahang had consented to the formation of a state government comprising Barisan and Pakatan.

Wan Rosdy was at the ceramah along with Amirudin and Amanah president Mohamad Sabu to stump for Barisan's candidate Datuk Seri Mohd Johari Hussain, who was contesting in the Tioman election.

Campaigning for the Tioman state seat is underway with the election to be held on Dec 7. 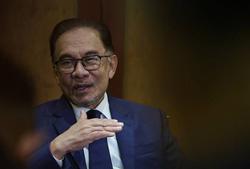