A 70-YEAR-OLD taxi driver in Singapore was commended by a local passenger on social media after he stopped the meter when they were stuck in a traffic jam, China Press reported.

The woman, 55, and the taxi driver got caught in a terrible jam as they were heading from a mall to her home in Bedok at 3pm on Monday.The driver then decided to stop the metering until traffic improved.

In her story shared on social media, the woman also noted that the driver said he came from a poor family and would help passengers whenever possible.

“He also told me that he sometimes gives half-price discounts or free rides to disabled passengers,” she wrote.

The woman added that upon arriving at her destination, the driver declined her offer to pay extra for the journey.

In an emotional post, the 31-year-old mother of two boys said that “Life may be unpredictable, but the baby is the most precious gift to us”, seemingly implying that the pregnancy was unplanned.

Chan and her husband, Hong Kong actor Kevin Cheng, 53, have been married for four years and are parents to Rafael, three, and Yannick, two.

> How much does the shield used by Captain America in the 2019 superhero film Avengers: Endgame cost?

Heritage Auctions will be auctioning off the prop used in the film at the Hollywood and Entertainment Signature Action on Dec 13 in Dallas, Texas.

Fans can get the original prop used by actor Chris Evans, who played Captain America, but for a hefty price.

The report also said the shield was made of high-density styrofoam with an aluminium exterior and a leather strip for the handle. 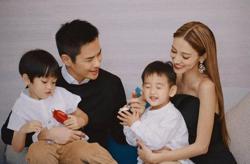