KOTA KINABALU: The Sabah government has tabled a surplus state Budget 2023, with its largest annual allocation to date at RM5.138bil.

Chief Minister Datuk Seri Hajiji Noor said the state's revenue collection for next year was estimated to be RM5.268bil, giving it a surplus of RM130.47mil.

Tabling the budget themed "Strengthening The Economy For People’s Prosperity” at the state assembly on Friday (Nov 25), Hajiji said it would continue the focus on economic growth based on the Hala Tuju Sabah Maju Jaya development plan.

“The primary focus is to drive and strengthen the state’s economy to ensure continuous and inclusive progress and prosperity for Sabah and its people,” he said.

Hajiji also said the revised revenue estimates for this year were projected to be higher at RM5.988bil, compared to the original estimate of RM4.707bil.

For next year, RM2.405bil, was expected to come from, among others, state sales tax of RM2.270bil, land rent of RM90mil and ports and harbour dues of RM44.5mil.

Hajiji, who is state Finance Minister, said RM808mil would be allocated for accelerating development in productive growth sectors namely agriculture, industry and tourism.

Additionally, RM634.41mil was allocated for the Chief Minister's Department. 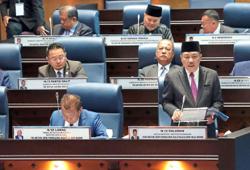