“The workshops were conducted by trainers from Britain and the United States through Google Meet,” he added.

He said Siti Nur Hanisah produced 10 haiku inspired by her parents and her school.

Johari added that Siti Nur Hanisah’s success is expected to encourage other students to improve their abilities and skills in writing and visualisation.

> MeleTOP’s newest host Hawa Rizwana Ahmad Redzuan says she is too embarrassed to ask for guidance or advice from Noor Neelofa although she greatly admires her for her success as the previous host of the entertainment programme, Kosmo! reported.

“I am really shy to ask Neelofa for advice even though I am friends with her elder sister Bella (Noor Nabila).

“We used to go cycling together.

“If I meet Neelofa at any event, I am reluctant to start a conversation with her, so I have never asked for her opinion on how to host MeleTOP,” she added.

Despite her shyness, Hawa Rizwana, 27, said she hoped to have a long conversation with Neelofa one day.

Hawa Rizwana said was shouldering a heavy responsibility in hosting the television programme that Neelofa had helmed for eight years with co-host Nabil Ahmad.

“‘MeleTOP’ has been running for over 10 years, and Nabil and Neelofa had placed it in a relatively high position,” she added.

On Nov 1, the question on who would become MeleTOP’s latest host was answered when Hawa Rizwana was introduced as its permanent host.

Neelofa left MeleTOP in December 2019, with no permanent host to replace her on the weekly show.

Instead, only guest hosts were invited to co-host the show with Nabil.

Among the celebrities who were previously invited to co-host the show were Uyaina Arshad, Elly Mazlein and Sherry Alhadad. 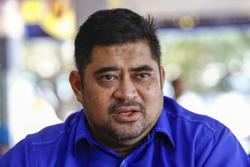