Birthday boy with a big heart 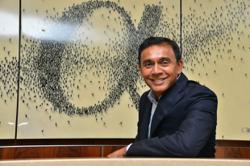 The gift was announced last Saturday as Wong celebrated his big day in a glittering ceremony at the Shangri-La Hotel, Kuala Lumpur, in the presence of family members, close friends, and colleagues.

In his address, Chor said that since his first donation to the Star Foundation in 2020, Wong had contributed more than one million ringgit from his personal funds.

“Just like his late father-in-law, Tan Sri Loh Boon Siew, Datuk Robert Wong is also very frugal in his personal spending, but they are both very generous when it comes to helping others.

“Even though he may not have a registered foundation at the moment, he has partnered with the Star Foundation, a government- approved foundation, to perform all of these acts of charity,” said Chor.

Wong, who is also the managing director of Boon Siew Sdn Bhd and is married to Datin Loh Ean, the eldest daughter of Boon Siew, said he treasures all the “freehold” friendships he has built over the years.

“I hope that younger generations learn the value of such friendships and their contribution to mutual prosperity,” he added.

At the event that took on a “007” theme, Wong was also honoured for his 50 years of service to Oriental Holdings and the Boon Siew Group of Companies, both of which he joined in 1972 in the roles of general manager and advisor.

The ceremony’s theme paid homage to the many individuals who took calculated risks in managing their businesses and lives throughout the Covid-19 pandemic and its aftermath, pretty much like the calculated risks taken by the fictional character, James Bond.

“I believe, as the Chinese do, that in every crisis there is an opportunity, as the word ‘crisis’ in Chinese is made up of the characters ‘danger’ and ‘opportunity’.

“I am confident that we will emerge stronger, with our Oriental Group’s strong balance sheet and human capital strength to capitalise on new opportunities during this crisis,” Wong added.

Chor commended Wong’s 50 years of sterling service and his philanthropic contribution, stating that he has never forgotten or neglected to help those who require assistance.

Wong later dedicated a song to Loh Ean, thanking her for her support throughout their five-decade marriage.

Since its establishment in 2004 as the charitable arm of SMG, the Star Foundation has been able to deliver meaningful initiatives with lasting outcomes to diverse groups of beneficiaries.