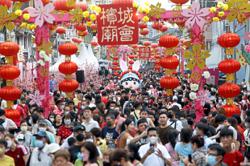 GEORGE TOWN: Thunder and raging rain did not hinder faithful devotees from bidding farewell to the deities on the last day of the Nine Emperor Gods or Kew Ong Yeah festival at several temples here.

Some foreigners were also spotted at the Tow Moo Keong Temple in Noordin Street.

A retired teacher who wished to be known as Karin, 65, from Finland, said it was her first time at the sending-off ceremony as well as joining in a float procession.

“I got to know about the festival through an article in the newspaper and decided to drop by..

“I have been in Penang for four years and it is interesting to see the different cultures in Malaysia.

“The atmosphere was vibrant and the drums were loud.

“I was shocked to see devotees with metal rods pierced through their cheeks.

“Although I experienced a similar celebration in Hong Kong, it is not exactly the same.

“There were no boats or sending-off ceremony in Hong Kong,” she said.

Karin’s friend Panni Baross, 46, who has been in Penang for five years, said she had attended the festival at the Tow Boo Keong Temple in Hong Kong Street in 2017.

“I remember the weather was very hot and it was not raining cats and dogs like today.

“I was impressed when some devotees held hot iron balls with their bare hands.

“Besides the Nine Emperor Gods Festival, I experienced Thaipusam and Hari Raya here, too,” the Hungarian said.

The temple in Jalan Cheong Fatt Tze (formerly Hong Kong Street), one of the oldest Nine Emperor Gods temples in the country, was closed for the past two years due to the Covid-19 pandemic.

However, this year saw devotees taking part in the celebration and a float procession being held.

“This year, it believed that there were more than 2,000 devotees.

“The reopening of the international borders also attracted more foreign tourists,” he said.

A boat was used to hoist the “Emperor Boat” filled with prayer paraphernalia, rice, sugar, vegetarian dishes and other essential items from its float before it was placed in the water.

The boat was then put out to sea.

The festival started on Sept 26, the first day of the ninth lunar month.

The event is dedicated to the nine sons of Tou Mu, the Goddess of the North Star, who is believed to control the Books of Life and Death.

Her sons, deified as ren huang (human sovereigns), are said to have the ability to cure illnesses and bless devotees with luck, wealth and longevity.

Devotees believe the gods come through waterways and processions are usually held from temples to the river or seashore as a symbolic gesture.

The festival is usually celebrated on the first nine days of the month an devotees observe a strict vegetarian diet.

Over at the Tow Boe Keong Kew Ong Tai Tay Temple in Gat Lebuh Macallum, entrepreneur Kwok Yew Loon, 41, and his family queued up to enter the temple despite a drizzle.

“This is the second time my three-year-old son Kwok Tian Lok has taken part in the festival.

“He enjoyed the lion and dragon dance performances. 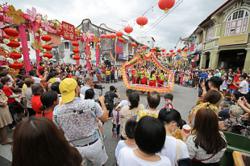