Some desperate enough to pay premium for maids

PETALING JAYA: A whopping RM28,000 is the fee a senior manager had to pay to secure a maid from Indonesia.

Another Malaysian paid close to RM20,000 to a maid agency.

However, the hefty cost is no deterrent for some employers who are desperate to acquire maids to not only perform household chores but to care for the elderly and sick.

These are some of the employers The Star interviewed after it was recently highlighted that some agencies were charging between RM17,695.08 and RM23,300 for a maid despite the price for hiring Indonesian domestic helpers has been capped at RM15,000 following an MOU between Malaysia and Indonesia.

The senior manager, who declined to be named, said despite the hefty fee of RM28,000, he was willing to fork out the money as a domestic worker was urgently needed to care for his bedridden mother at home.

The fee also included three months’ salary for the maid, he said.

“As we sourced from our regular agent, no deposits were needed. We only had to make the full upfront payment once the helper arrived in June,” he said.

He added that he began sourcing for a helper from early April as his previous maid’s contract was slated to end in June.

“We are also fortunate to have not gone without a maid during this period,” he said.

The cost, however, is too high for some, who have opted for cleaning services provided by agencies.

General manager W. Thomas, 30, said his family had to wait for one year before finally securing an Indonesian maid in June.

“We paid close to RM20,000 to the agency as we really needed a maid, given that we are always out and about for work, leaving only our grandmother at home.

“Our helper also plays the dual role of looking after the home and caring for our grandmother,” he said, adding that the maid hired was a big help.

Food and beverage entrepreneur Nicholas Tham, 40, opted for cleaning services instead of getting a full-time maid due to various reasons.

“We did consider getting a maid but after hearing stories of how some maids had run away after two to three months, we prefer less risky measures.

“It is more affordable to hire cleaning services where these workers come over and clean homes for a certain fee,” he said, adding that the workers would come to his house monthly.

“They go to foreign lands to work and often take care of the needs of the families in spite of the loneliness they face,” she said.

She added that domestic workers were also human beings and they had dignity, rights and needs.

“It is our hope that the Malaysian government will take the effort to protect them through a separate legislation and regulatory mechanism.”

Indonesian Ambassador Hermono told The Star that any agencies charging more than RM15,000 for an Indonesian domestic worker would be in violation of the MOU signed between Indonesia and Malaysia.

“The price cap is RM15,000. If any employer has paid more than this, they can report it to the Indonesian embassy or even to the Human Resources Ministry.

“The agency will then be blacklisted from further acquiring Indonesian domestic workers,” he said. 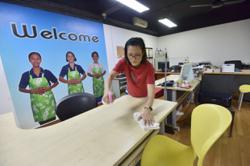