Workers at Dataran Merdeka, Kuala Lumpur preparing a stage for the National Day celebration. Police say they will deploy about 1,100 personnel to maintain security in the area on Aug 31. – AZHAR MAHFOF/The Star

KUALA LUMPUR: Those wishing to attend the National Day 2022 parade at Dataran Merdeka here on Aug 31 are advised to plan ahead and use public transport as several main roads will be closed that day.

"We (police) advise the public, including participants involved in the National Day celebrations, to arrive early. We also encourage them to take public transport such as the LRT and MRT.

"Those not using public transport must make sure that their vehicles are parked properly and do not obstruct traffic.

"We have identified a number of car park locations, among them Jalan Tanglin, the Tanglin Health Clinic area and in front of the Dang Wangi District Police Headquarters," he said during a guest appearance on RTM1's Selamat Pagi Malaysia programme on Thursday (Aug 18).

ACP Noor Dellhan said about 1,100 police personnel would be deployed to ensure public safety and smooth running of the parade, which is expected to be held from 8am to 11am.

He said three layers of security would be implemented on the day.

The internal layer covered Dataran Merdeka itself; the second would be its perimeter; and the third, up to a 3km radius of the venue.

"Several police personnel will also be tasked with monitorong the 112 CCTV cameras around Dataran Merdeka to prevent untoward incidents," he added. – Bernama 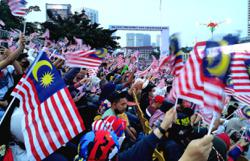