Customers can be one of the first to purchase the new Legion laptops at Lenovo.com or any Lenovo Exclusive Stores (LES) as well as official stores on Lazada and Shopee.

From now to Aug 31, all purchases of a new Lenovo Legion 5/5i at any LES will come with limited-edition Legion merchandise worth RM322 and a free three-month PC game pass.

Customers who need more power with a Lenovo Legion 5 Pro/5i Pro will receive a Lenovo 500 bluetooth in-ear headphone and a Lenovo Legion active gaming backpack with a total worth of RM492, along with a three-month PC game pass with their purchase at any LES. Free gifts are only available while stocks last, do not miss out on this savage deal.

The deals don’t stop there, customers shopping on the Lenovo Malaysia Official Online Store can receive a free three-month PC game pass with the purchase of every Legion 5i / Legion 5i Pro.

Calibrated to crush the competition – the Lenovo Legion 5 Pro series

Everyone has to start somewhere; before a player gets their chance to kill it in the series, they’ve got to first level up with a battle-tested laptop known for delivering elevated gaming performance that’s a notch above mainstream and designed to fit seamlessly into your life.

Engineered to handle full-powered graphics and third-party tested for max performance, the esports-centric Lenovo Legion 5i Pro and Lenovo Legion 5 Pro are the world’s first 16-inch laptop series with a WQHD+ up to 240Hz adaptive refresh rate gaming display to help you rise in the ranks. 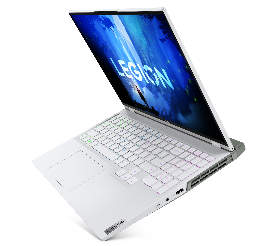 The Lenovo Legion 5i/5 Pro laptop is shown in glacier white hue.

Certified as Gold Label for its TUV Rheinland high gaming performance, this laptop helps to reduce the negative effects of blue light from increased screen time.

Get up to VESA DisplayHDR 400 certification and up to 500 nits of brightness for an incredible viewing experience. It supports Dolby Vision, which brings your favorite entertainment and games to life with spectacular picture quality and buttery smooth gaming via NVIDIA G-SYNC with less screen tearing.

With expanded bandwidth from 4800Mhz DDR5 memory and up to 1TB PCle SSD (Gen4)​ of storage supported, consumers will experience less lag with improved Wi-Fi 6E antenna placement and an 80Whr battery capacity and super rapid charge to go from zero to 80 percent battery life in just 30 minutes charging.

For seamless gameplay and productivity on the go, the latest machines support up to 135W USB Type-C charging for added mobility, with a slimmer adapter delivering dedicated power between 230W to 300W.

Turbo powered with a choice of latest up to 12th Gen Intel Core i7-12700H processors or next-gen AMD Ryzen processors.

Get robust graphics performance from a choice of several optimised configurations including up to the latest GeForce RTX 30 Series Laptop GPU on offer that really packs a punch in AAA games. 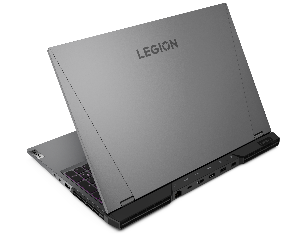 The Lenovo Legion 5i/5 Pro laptop shown in storm grey.

A copper block sits under the CPU as a heat sink to help dissipate heat created in hardcore battle sessions, and the fan blades on the Lenovo Legion laptops are slimmer by up to 40 percent from the previous generation to help keep the system quieter.

Legion Coldfront 4.0 now offers noise suppression as one of its new attributes thanks to a noise-insulated chassis.

Smarter noise canceling happens to also be a shared obsession with Nahimic Audio by SteelSeries.

Adjusting each band helps the user highlight the sounds most important to them and their gameplay – like hearing in-game enemy footsteps clearly while minimizing distractions.

Delivering 2 x 2W stereo speaker system, PC gamers can also optimize the sounds around them for an immersive experience with Nahimic’s ‘easy surround’ feature designed to incorporate any Bluetooth speaker to improve a player’s spatial awareness through sound. 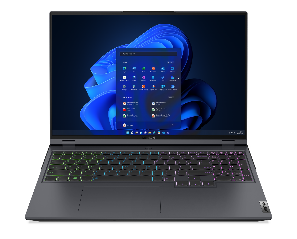 Available in metallic storm grey and pearlised glacier white hue, the durable body of the Lenovo Legion 5 Pro series is thinner than the previous generation.

Featuring a trimmed lid and hinge design, the new laptop comes with a zero bump hinge for added protection and an electronic privacy shutter on top-placed HD webcam. The Lenovo Legion 5 Pro series is also built from an aluminum and magnesium metal blend (Al + Mg) for extreme lightness.

Laptops feature new Legion spectrum RGB lighting, a 4-zone backlight effects system developed especially for Lenovo Legion PCs and our advanced Legion TrueStrike keyboard. Choose between optional blue backlighting that pairs nicely with the laptop in Glacier White or try every color in the rainbow with 17 customised color profiles to express yourself with – all accessible via Lenovo Vantage.

Cooler, thinner and quieter than before – the Lenovo Legion 5 series

Purpose built for virtually all the players out there who want an all-rounder PC to help them stay social, connected and just have fun without sacrificing performance, the 15-inch Lenovo Legion 5i laptop with up to 12th Gen Intel Core i7-12700H processor and the 15-inch Lenovo Legion 5 laptop with next-gen AMD Ryzen processors strike a sleek, happy medium between gaming performance while also handling multitasking, productivity and entertainment needs beautifully.

These slim and super minimal laptops are unobtrusive and come equipped with up to optional NVIDIA GeForce RTX 3070 Laptop GPU, or take your PC graphics experience even further with the latest GeForce RTX 30 Series Laptop GPU for new levels of gaming excitement and up to 140W TGP from the GPU and up to 1702Mhz boost clock. 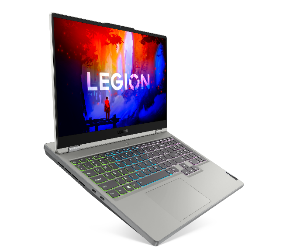 The Lenovo Legion 5i/5 laptop shown in cloud grey.

Both laptop SKUs are offered in storm grey and cloud grey hues with a choice of 4-Zone RGB or white backlighting via our new Legion spectrum RGB lighting solution built into the Legion TrueStrike keyboard that now comes color matched in all grey with swappable WASD key caps for a customised look.

Whether typing a report for class or work, or just clicking through MOBAs, your keystrokes are now noticeably quieter with a 33% reduction in percussion noise over the previous generation via the improved key travel of soft-landing switches yielding 1.5mm key travel.

The Lenovo Legion 5i/5 laptop shown in storm grey

Effortlessly portable and designed to be 15% thinner than before for even more mobility, another great change brought by this mainstream gaming laptop is the improved aluminum and magnesium blended metal cover – so wave bye to that old plastic feeling and say hello to cooler skin temps.

Check out the design of the camera bump for an improved 1-finger lift solution while the handy rear I/O indent keeps any USB-C adapters plugged in flush to the machine for an easier time slipping this laptop in-and-out of a bag.

Offering speeds for intense gaming with flexible display configurations for almost every gamer, including an up to 15-inch WQHD (2560 x 1440) IPS 16:9 display with super-fast up to 165Hz refresh rate, 100 percent sRGB color gamut at 300 nits bright, and full spectrum visuals with Dolby Vision – other features of the new Lenovo Legion 5i and Lenovo Legion 5, include: