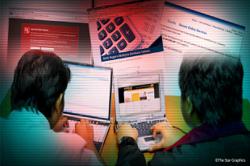 KOTA KINABALU: A total of 535 cases of online fraud involving cumulative losses of up to RM21.3mil were recorded in the first seven months of this year in Sabah.

Sabah Police Commissioner Datuk Idris Abdullah said the trend in the first seven months of this year was indicating rising numbers if compared to the whole of last year which involved RM25mil losses involving 1,148 cases.

"This amount proves that there is always an increase every year regarding the number of cases and the value of losses.

"In an effort to control the increase in fraud cases, the police continue to intensify arrests involving this case," he said in his speech read by Sabah Police management head Datuk Zabidi Md Zain at a cyber crime prevention and awareness campaign in Ranau district.

Idris said that police had made 679 arrests involving online fraud cases that occurred in Sabah this year.

"Although various investigations, arrests and prosecutions have been carried out, there are still people who are being deceived by the tricks of this 'scammer'.

"Therefore the police will continue to increase efforts by implementing several approaches to give awareness to the public," he said.

"During the first seven months of this year, a total of 191 awareness activities have been implemented compared to 156 campaigns last year.

"We will also continue to intensify efforts, including inviting the community to become the most important strategic partner with the slogan 'Let's Fight Scammer Together'," he said.

Idris hoped that all the knowledge gained through the crime prevention campaign can be used and shared with family, friends and the community so that they do not become victims of online fraud.

Meanwhile, Deputy Home Minister II Datuk Jonathan Yassin said that such campaigns were important as it would help the community.

"The public can check with either the police or the banks involved before any action is taken.

"Don't trust anyone making calls without knowing their background. If the matter is checked with the authorities, this crime will be prevented," he added.