S. Tamilrasu (left) with his father are happy that he was offered a job after five months of unemployment - ILI AQILAH.

TAPAH: After five months of being unemployed, a 32-year-old disabled man was able to secure a job during the Social Security Organisation’s (Perkeso) job affair.

S. Tamilrasu who went to the carnival with his father from Buntong, Ipoh said he is happy that a company had offered him a position as a sales assistant.

“Previously, I worked at a supermarket. A few days before the carnival, the Perkeso officer who often kept in touch with me told me about the event.

“Together with my father, we came to the carnival early in the morning and I am so happy that I received a job offer at a new supermarket in Ipoh,” he told The Star when met at the carnival at the Kompleks Belia Dan Sukan here yesterday.

Tamilrasu, who is a slow learner (OKU type), said he is excited to start his new job soon. “The carnival has given me a new opportunity and I am glad that I get to attend it. If a disabled person like me is able to get a job, I believe everyone can also get it,” he said.

Organised in collaboration with Pusat Aspirasi Anak Perak (Pasak) and Universiti Teknologi MARA, the “Karnival Kerjaya Jamin Kerja Keluarga Malaysia 2022 Negeri Perak” has seen about half of the jobseekers offered jobs during their first interview at the carnival, while another half were called for second interviews, to be held soon.

Meanwhile for 28-year-old Nawi Chiklup, he can finally take a breather after he was offered to work as an operator in Selangor.

“Before the Movement Control Order, I worked as a kitchen crew at Kelana Jaya and was later unemployed after I returned home two years ago.

“I have sent my resume numerous times and attended at least five interviews but failed to get any job offers.

“When I was told by Perkeso about this job carnival, I was initially worried, since I have no experience working as a factory operator. But when I received the offer, I was in disbelief and excited,” he said.

“As an Orang Asli, I am thankful that the job carnival exists. Not only did it give me a chance to meet new friends, but it has also helped me get a job.

“A lot of us might be shy to go for interviews by ourselves as we don’t usually go out from our village, so I hope Perkeso will continue to hold this carnival, as it will certainly help the economy of our community,” he said.

For Long Noraini Muhammad Zaki, 19, she is excited that she could help her family financially. “I have four siblings, my mom is not working and my dad has passed away. As the eldest daughter, it is my responsibility to provide for my family. That is why I’m so excited when offered a job during the carnival.

“Right after I finished school, I had a lot of jobs such as working at grocery stores, agriculture farms and as a babysitter. Now that I have a permanent job, I am certain that it will change the future of my family,” said Long, who is also from the Semai tribe at Pos Bersih, Slim River.

Long added that although she will be working in Shah Alam, Selangor, she is confident that she will be able to adapt to the new environment.

“I was in a boarding school in Ipoh last time, so I am used to being away from my family.

“My main priority right now is to provide for my family, therefore I am happy when Perkeso informed me about the job carnival.

“They even provided transportation for my friends and I to attend the job carnival,” she said.

“Our factory is in a dire need to get workers and prior to hiring the Orang Asli, we have worked closely with the Malaysia Prison Department and hired about 1,500 former prisoners and convicts to work with us.

“Now, together with Perkeso and the Orang Asli Development Department (Jakoa), we are aiming to hire at least 100 Orang Asli to work with us this year.

“Our five new employees will be working as operators at our factory in Shah Alam,” he added.

Saravanan said with the reopening of various economic sectors, the ministry is aiming to lessen the unemployment rate in the country.

“Despite facing both political and health crises for two years, our country has been able to reduce the unemployment rate from 5.3% to 4%.

“Right now, the ministry has set a new target that is to go under 4%.

“If we can achieve under 3.5% or 3.4% we can say that there may no longer be unemployment issues in the country.

“I believe that with the expansion of the country’s economy, we will be able to provide more job opportunities,” he said. 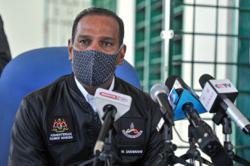 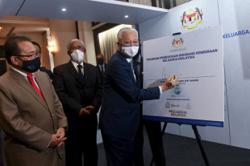