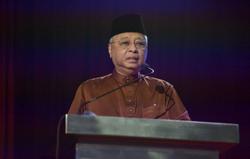 PUTRAJAYA: The role and contribution of Malaysia’s halal economy should be further tapped so that it can make a greater contribution towards the nation’s coffers, says Datuk Seri Ismail Sabri Yaakob.

The Prime Minister said with the economy facing global uncertainties and stiff competition among regional economies, the halal economy could play a bigger role.

“We want to see the halal economy play a more significant role in the national economy.

“It should be recognised as a system that is competitive and one that contributes to the economy.

“This can be done by giving it a more prominent role in the country’s development, not just in the Islamic financial sector and food sector but in other sectors, too,” he said at the Tun Abdullah Ahmad Badawi lecture yesterday.

Malaysia was ranked first among 81 countries and regions in the Global Islamic Indicator for the ninth straight year as a result of its thriving market for Islamic finance and range of halal products and services.

The indicator, published in the annual Global Islamic Economy Report by US-based DinarStandard, compares economies worldwide in terms of market size, innovation and their regulatory landscape as it pertains to Islamic law.

The Prime Minister also said a commission should be in place to ensure greater syariah compliance among those providing halal products and services in Malaysia.

Proposing this, he said the idea should be given consideration to better regulate and monitor the Islamic financial sector as well as the halal industry players.

He said currently, different bodies are responsible to monitor the two sectors – Bank Negara and the Securities Commission for Islamic financial sector while the halal industry comes under the purview of the Islamic Development Department.

“I hope the setting up of a Syariah Compliance Commission will be given due attention and consideration so that Malaysia’s aspiration to be a model and main reference for halal economy can be realised.”

He said the market for halal products should also include non-Islamic countries.

“The principle of halal is not just about religion but it has given a new paradigm to global issues such as food safety, environmental awareness, economic sustainability and animal welfare.”

Ismail Sabri said realising the potential, the government has given due focus and attention to Malaysia’s halal products industry by including it in the country’s Industrial Masterplan.

Through the masterplan, strategic cores were drawn to turn Malaysia into a regional centre for halal services and products such as pharmaceutical products, medical equipment, food processing, textile and clothing.

“Halal is not just about meeting religious requirements but it has become a lifestyle and quality guarantee for a country,” he added.

The Prime Minister said one of the bodies responsible for this is the Halal Development Corporation – a brainchild and initiative of former prime minister Tun Abdullah Ahmad Badawi.

This agency, he said, had led the way in the development of the halal industry by determining halal standards and an audit process to protect the country’s halal integrity.