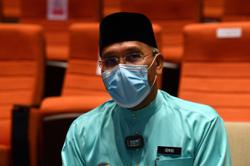 IPOH: The public is urged to report to the religious authorities if they come across Muslims praying along with a fan and making it as though it is another worshipper.

Minister in the Prime Minister's Department (Religious Affairs) Datuk Idris Ahmad said this seemed to be the latest trend among young people and this should not be happening.

"I advise them to enrich themselves with religious knowledge, seek the help of a religious teacher or attend lectures at mosques or surau.

"Do not insult Islam and follow blindly what is shown on Youtube or other unknown sources. This nonsensical practice must be reported to the religious office so that action can be taken," he said when met by reporters at the Pas Aidilfitri Open House, also attended by PAS president Tan Sri Abdul Hadi Awang at the Indera Mulia Stadium here on Saturday (May 28).

Recently, there has been a trend where young people perform their prayers with an oscillating fan, making it as their make-believe spouse as shared on videos, mostly uploaded by people who are single.

Meanwhile, when asked about allegations of fraud using Islam and religious figures to deceive the community, actually intended for personal gain, the PAS vice-president described such acts as wicked and outrageous.

"Victims of such scams must come forward so that the authorities can take action against those involved," he said.