Ahmad said that all other registered branches remain with Warisan under the leadership of Datuk Seri Mohd Shafie Apdal.

“Officially, all registered Warisan branches are intact. There were only a few committee members who left but this will not affect the party and its grassroots support,” said Ahmad, who is the Papar MP.

Dismissing Anthony’s argument that Warisan should not have expanded to Peninsular Malaysia, he said this does not stop the party from focusing on Sabah issues, including its rights under the Malaysia Agreement (MA63).

Ahmad said he believed that the move to expand to the peninsula was the right step to ensure Warisan can win seats there so the voices and problems of Sabahans can be raised.

“If the people of Kuala Lumpur can come here to share 25 seats (in Sabah) with us, what’s wrong with us going to KL to get a share of the seats there.

He added that Warisan could strengthen its position in national politics. 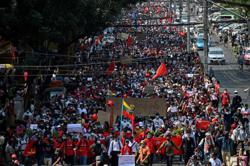