KOTA KINABALU: A company director from Johor has been sentenced to 15 years’ jail and nine strokes of the cane for cheating six contractors here of over RM660,000.

He had cheated the contractors by claiming that he could help them get award letters for projects if they paid him as requested.

The magistrate sentenced him to 24 months’ jail and a stroke of the cane for each charge.

For a seventh charge, Mohammad was jailed three years and fined RM3,000 in default six months' jail as well as three lashes for cheating one Agang Insi of RM20,000 on Feb 25 last year.

This sentence was meted out by senior assistant registrar Abdurrahman Abrar Jarni who sat as a Magistrate.

Earlier in the hearing, the prosecution heard that Mohammad had cheated the victims by offering nonexistent projects involving the replacement of streetlights around the state, as well as cleaning works at the Sipitang Oil and Gas Industrial Park (SOGIP) worth millions of ringgit.

The contractors realised that they had been cheated when he could not be contacted after they had waited months for the letters, and subsequently filed police reports.

Mohammad, who was unrepresented, appealed for leniency and concurrent jail terms as he had to care for his children. 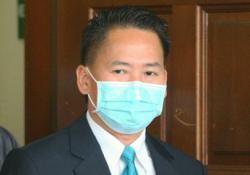