PETALING JAYA: Malaysia must immediately put in place strategies to adapt to climate change, say environmental advocacy groups, as they urge the government to start with stronger protection of the natural environment.

He said the unprecedented massive floods that ravaged many parts of Malaysia since last month were closely related to climate change, and that the government must develop solutions to protect the forests.

“This is because climate change is the result of nature damaged by irresponsible parties, especially through widespread logging activities,” he said, adding that logging of natural forests in the country must be stopped.

Climate change causes unpredictable weather patterns and leads to unpredictable seasonal forecasts according to the usual time, such as the monsoon season.

“This results in the uncertainty of rain prediction and the rate of rainfall, which leads to flooding.

“Therefore, the authorities and the community should pay attention to the issue of climate change – which is definitely a major factor leading to flooding.

“Forests must be defended and forest areas increased if the current government is really serious about addressing the issue.

Abim and the Association for the Protection of the Natural Heritage of Malaysia (Peka) recently started the “Henti Balak” online petition to urge the government to impose a moratorium or immediate cessation on logging activities.

The petition has so far garnered over 200,000 signatures, said Muhammad Faisal, adding that this was emblematic of the deep concerns people had against logging activities.

Abim also welcomed the directive issued by the Pahang State Forestry Department on Jan 3 to order a temporary halt on all logging-related activities during the current monsoon season, he added.

“This directive should be followed by the authorities in other states to ensure that efforts to preserve the environment can be done holistically and effectively,” he said.

Association of Water and Energy Research president S. Piarapakaran said unpredictable weather patterns along with climate change was likely to become more extreme and would affect Malaysia more frequently, adding that the country must be guided by science and data in order to map out a better future.

He suggested the government should form a special task force to simulate the unpredictable weather of the past and the current flood situation as it was important to predict future flooding.

“This simulation is to predict changes in weather patterns and identify whether there are any effects of climate change and the level of interference.

“This special task force must also identify whether there are predictable patterns of change. If there is a clear pattern, it will help estimate the design of the mitigation project with the recommended safety factors,” said Piarapakaran.

Deforestation and loss of natural buffers for flood mitigation is also a factor causing the flood situation to worsen every year, he said, adding that the Auditor-General must investigate the rate of deforestation over the past 30 years and the actual remaining virgin forest reserves.

Recently, 45 non-governmental organisations and local communities urged the Federal and Pahang governments to launch independent inquiries on the massive mudflows and log slides that occurred in Karak, Bentong, last month.

At the national level, they also urged the government to, among others, incorporate the experience and lessons learnt into Malaysia’s forest, land and flood mitigation plans as well as the proposed Climate Change Adaptation Plan.

They called for the government to establish more cross-sectoral partnerships for mainstreaming disaster risk reduction into development planning, promoting risk-informed investment, and strengthening urban and rural resilience, as a result of climate-induced disaster in an ever-changing environment.

“Establish effective forest and river catchment conservation and restoration action plans or policies and responses tailored at the mukim, district and state levels, and new methods for monitoring and enforcing forest and catchment protection.

“Start a catchment protection, tree planting and river restoration programme that can contribute to reducing flood risks as part of a wider flood risk management approach, including conventional flood defences.

“Develop and implement Integrated River Basin Management for all river basins in the country to avoid development in floodplains, lowland areas, river reserves, wetlands and peatland areas to act to retain excess water and reduce floods,” they said in a joint statement. 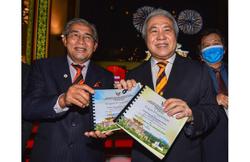