MELAKA: A 50-year-old female teacher made a desperate move to secure personal loans from two financial institutions after getting threats from a Macau scam syndicate.

Melaka Commercial Crime chief Supt E. Sundra Rajan said the teacher’s ordeal started on Oct 4 after receiving a call from a fraudster claiming she had applied for insurance withdrawal amounting to RM78,000 in four occasions.

“However, the victim denied submitting such claims before she was accused of being involved in a money laundering case totalling RM2.8mil,” he said on Wednesday (Dec 8).

Supt Sundra said the victim was then connected to an individual claiming to be a police officer from the Jalan Pudu police station in Kuala Lumpur.

He said the victim was then asked to talk to two other “senior police officers” where she was instructed to keep aside RM568,000 as bail money as her “case” had been filed at the Kota Kinabalu High Court.

“The con men told her that she only needed to transfer the money to court once she was charged,” he said, adding that the victim needed to apply at the two separate banks due to her high loan quantum.

Supt Sundra said the victim was then asked to transfer all her money to only one of her bank accounts until her case appears in the court.

He said the victim was also asked to reveal her banking details to the so-called police officers to “prove” she had enough money to pay the bail.

“The victim felt she was duped when RM199,111 from the RM380,000 that she had earlier obtained as loans was missing from her bank account, just hours after she made the transfer and decided to lodge a police report on Dec 7 at the Tiang Dua police station.

“We are now investigating her report under Section 420 of the Penal Code,” he added. 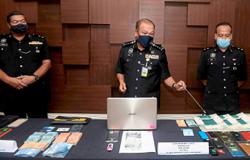