Peace of mind while on vacation

PETALING JAYA: As anxiety over the Omicron variant persists, the travel industry is cautiously carrying on as some wayfarers are still eager to leave their footprints on land beyond their borders; however, others have hit the pause button.

Apple Vacations Group executive chairman Datuk Seri Lee Ee Hoe, or Lee San as he is better known, said that because of the uncertainty surrounding Omicron, the agency has decided to put December trips to Europe on hold.

“As a responsible travel agency, our duty is to ensure the safety and comfort (of our customers),” he said.

Lee noted that regaining public confidence in travelling instead of making a profit has become the push factor for promoting travel again in the current situation.

“We are pushing hard for winter holidays this December, and it is not for profit or income but mainly to make the public feel that tourism is recovering step by step. In fact, the response has been very encouraging,” he said.

Lee said that to ensure the safety of their customers, compliance with Covid-19 protocols is a priority.

Scientists are intensively studying the Omicron variant to learn more about its transmissibility and severity and vaccine efficacy against it.

While the variant does not seem to be putting a damper on domestic tourism, its emergence has caused some cancellations and postponements of trips into Malaysia, said Malaysian Association of Tour and Travel Agents (MATTA) honorary treasurer Nigel Wong.

“It’s particularly so for those coming into Langkawi because of the uncertainty caused by travel restrictions placed on certain countries.

“Tourism will continue to be affected as long as the situation remains unpredictable, such as the imposition of sudden restrictions if a new threat arises,” he added.

On Friday, in an effort to curb the spread of Omicron, the Health Ministry announced that several countries were not allowed to participate in the Langkawi travel bubble programme.

Wong said that to inspire confidence in touring once again, MATTA has collaborated with some organisations to provide a “first-to-last-mile safe travel experience”.

“The programme is internationally recognised and designed to promote Malaysia as a travel-safe destination and to reassure travellers that members of the Travel Safe Alliance Malaysia are well equipped to ensure their safety and comfort,” he said.

The news about Omicron, however, has not stopped Malaysians from wanting to go on long-overdue domestic trips.

Executive Christine Ong, 24, said that plans to travel to Cherating, Pahang, with her family were postponed last year. She does not want to miss the chance this time around.

“I have already lost the two best years of my youth and it is time to enjoy life again,” she said, but was quick to add that she would faithfully adhere to safety guidelines throughout the trip.

The Selangor resident said that to ensure maximum safety, all the family members will do Covid-19 self-tests before embarking on the trip.

Another holiday-goer from Petaling Jaya, who wished to be known only as Finian, said he would proceed with his long-planned trip to Sabah to visit his partner and family, barring any government restrictions.

“I believe that, at the end of the day, the authorities can only do so much to prevent the spread of the virus, it is the public which has a major role in ensuring everyone’s safety.

“However, living cautiously is one thing but we cannot live in fear and forgo our daily activities forever,” the 26-year-old executive said. 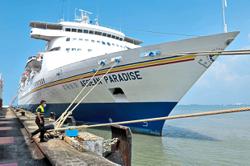 Jho Low files defence in 1MDB civil action, says he was never in a position of influence
Johor polls: It's just an excuse to axe Bersatu from state govt, says former exco
Fight breaks out after pet dog gets run over
RCI to investigate Tabung Haji in progress, says Wan Junaidi
Singapore High Commissioner hopes to see VTL quota increased soon
Little opportunity left to save Malayan tigers, says conservation group
Bill limiting PM's term to 10 years to be tabled at next Parliament meeting
Najib gets May 20 deadline to apply for appointment of Queen's Counsel
Malaysia gets first shipment of 624,000 Covid-19 vaccine doses for children
Wan Junaidi: Govt may revive dedicated law ministry, but pros and cons must be reviewed