JOHOR BARU: A human-trafficking ring which had been active for the past eight months was crippled with the arrest of 12 suspects, including one of the syndicate’s masterminds.

The suspects, along with the other four Indonesian men and three Indonesian women and two locals aged 22 to 50, were arrested at three locations in Johor Baru and Kulai.

Those arrested played different roles in the ring – three were ground agents (tekong darat), three were transporters and one was a transit home keeper – while the other five were customers.

“Janggut and his gang ran an organised operation that charged each foreigner RM1,300 to bring him into Malaysia by sea from Batam or Tanjung Pinang in Indonesia – this is not inclusive of the transportation fees after he lands here.

“The migrants were then brought to a transit home in different locations to avoid detection, before continuing on their journey to their desired destination or to a bus station if they wanted to travel on their own.

“The syndicate also charged RM1,500 to bring foreign migrants from Malaysia back to Indonesia and the fees were paid in full before departing from shore. Catch on land: Comm Ayob Khan showing photos of a ground agent and four illegal immigrants who were arrested at a roadblock during the press conference at the state police headquarters. — Bernama

“We believe the syndicate members were also aided by other agents, including those from the community who acted as lookouts and scouts for foreigners,” he said in a press conference at the state police headquarters here yesterday.

Comm Ayob Khan said the syndicate had been operating near Sungai Tengah in Bandar Penawar, Kota Tinggi, since April this year.

The syndicate is believed to have brought in 464 foreigners and another 150 out of the country on 15 boats.

The case is being investigated under the Anti-Trafficking in Persons and Smuggling of Migrants Act 2007 and the Immigration Act 1959/63.

Police have arrested 252 individuals under Ops Benteng from January to Dec 3. These include 62 skippers and 190 foreigners from Indonesia, Pakistan and Thailand.

“These illegal migrants are entering the country in hopes of landing jobs now that most economic sectors in Malaysia have reopened.

“We are anticipating this and we are on standby to take action against any human smuggling activities,” he added. 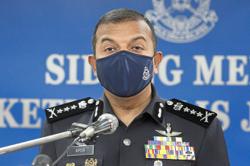