KOTA KINABALU: Partners under the Gabungan Rakyat Sabah (GRS) state government are expected to meet soon to discuss various matters, including the possibility of formally registering the coalition as a political party.

However, GRS chairman Datuk Seri Hajiji Noor (pic), who is also Sabah Chief Minister, did not mention any dates but said any decision would be based on agreement of party leaders.

Various calls have been made for GRS to officially register as a party so that they can face the coming elections as a united front and avoid clashes between allies.

"We need to discuss with them (party leaders), if it is for the good of GRS politically, I believe they will agree and then we will decide," he told reporters at the press conference after a closed-door Malaysia Agreement 1963 (MA63) Special Council briefing session on Saturday (Dec 4).

On another matter regarding a Labuan immigration loophole for entry into Sabah via Menumbok or Kota Kinabalu ferry terminal, he said they would look into the matter.

Minister in the Prime Minister's Department (Sabah and Sarawak Affairs) Datuk Seri Dr Maximus Ongkili had said last month in Labuan that there were no Immigration controls or checks on Labuan Federal Territory passengers arriving by ferry and sea vessels at the two locations.

"The rationale was that the system has been like this all along but there were requests from our people that those coming to Sabah need to be screened.

"So we will study and see if something needs to be done and we will obtain a report from Immigration," he added. 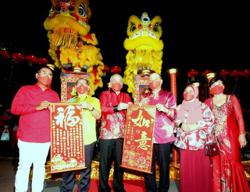