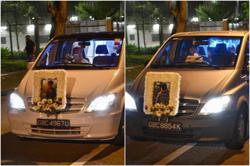 Puteri Aishah said she has waited for such a moment for a long time, and hoped that the marriage would be everlasting.

“Alhamdulillah, the ceremony went smoothly after it had been postponed previously due to the Covid-19 pandemic.

“I am grateful that our dreams of having family members from both sides witnessing our marriage (came true),” she said, while apologising for not inviting other celebrities due to restrictions imposed by the pandemic.

Speaking about Firdaus, she said, “I got to know him for two years and I like his character. He is a good man who prioritises his family.

“At the same time, he fully supports my interest in acting. He has also given me the green light to continue my career as an actress,” she added.

> A man in Kuala Terengganu had to endure seeing his younger brother die in a burning vehicle, then bear witness to the death of their father just 10 hours later, Kosmo! reported.

Mohd Jasmani Jaafar, 50, was in an ambulance transporting his father Jaafar Abdullah, 76, home.

His father had been suffering from chronic asthma and high blood pressure and had asked to return home as there was nothing more doctors could do for him at the hospital, and he wanted to die at home.

On the way home, the vehicle that his brother Mohd Azizi, 37, was in, which was trailing the ambulance, caught fire in Jalan Kuala Terengganu-Kuala Berang at 7.05pm last Friday.

“I saw my brother’s vehicle ablaze while I was in the ambulance.

“I tried to help him, but was prevented from doing so by others as the fire was too fierce. I had to watch as my brother perished in the fire,” Mohd Jasmani said.

His misery did not end there as his father passed away some 10 hours later.

> Actress Fauziah Ahmad Daud, 59, aims to pass on her knowledge of the entertainment industry to the younger generation through her Ogy’s Centrestage & Academy, Berita Harian reported.

The actress, popularly known as Ogy, said she finally got to realise her father’s dream of seeing her as an educator.

“My work in educating and sharing knowledge has indirectly realised my late father’s dream of seeing me as an educator.

“I would choose to leave behind Ogy’s Centrestage & Academy, which was established in 2018, as my legacy,” she said.