IPOH: An administrative clerk is living in fear after her boyfriend allegedly molested her and threatened to circulate nude photos of her if she refused to have sex with him.

Relating her ordeal, the 24-year-old woman, who declined to be named, said the 31-year-old man is also her colleague.

She said when she was in her car with him at a parking area near a recreational park at about 7pm on Oct 9, he wanted to have sex with her and she refused.

"When I said no, he showed me some inappropriate photos and videos of me that he had taken earlier.

"After seeing the videos and photos, I told him to delete them. He got angry and started hitting my hands, head and leg with his mobile phone," she told a press conference organised by Perak MCA public service and complaints bureau chief Low Guo Nan on Wednesday (Nov 3).

The woman said she no longer wanted to continue her relationship with the man, but he kept calling and harassing her.

"He has molested me a couple of times, and also said he would circulate my photos to my friends and family.

"On Oct 10, he came to my house around midnight, created a scene and left.

"I can no longer tolerate his behaviour, and decided to lodge a police report today," she said.

Low, who accompanied her to the police station, hoped action would be taken.

"I hope he will not harass her anymore," he added. 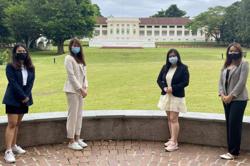