Inspector-General of Police Datuk Seri Acryl Sani Abdullah Sani said the allocation which included creating 100 new posts would enhance the division's investigative abilities at every police contingent while also increasing quality of service to the community.

"The allocation will also ensure that D11 gives the best service in the aspect of investigating sexual crimes involving women and children," he said in a statement.

Meanwhile, he said the addition of eight control posts for the General Operations Forces at Pagalungan, Sabah and Temong Mura, Sarawak would increase continued security and control of the borders.

"The infrastructure will enhance our abilities to ensure security in both states.

"The posts that are set to be constructed will directly contribute to increasing our capacity to ensure border security is always at its best," he said, adding that the force was also grateful over the announcement of allocations to repair and replace elevators and police quarters.

Acryl Sani also welcomed the announcement on increasing police volunteer reserve allowances from RM7.80 to RM9.80 for officers and RM6 to RM8 for rank-and-file personnel.

"This will motivate and raise spirits of the community to join the volunteer reserve and fight crime together," he said.

"The RM230mil for maintenance and repairs of police quarters, schools and accommodation in military camps was also welcomed, as well as the increasing of eight more General Operations Force posts to step up border security.

"The allowance increase for the Police Volunteer Reserve that will benefit over 10,000 PVR was also timely," he said when contacted.

Dave said the allocations were more on the strengthening of the supply side but the police must emphasise on prevention of crime rather than just investigating them after they occur. 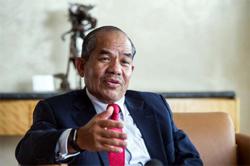