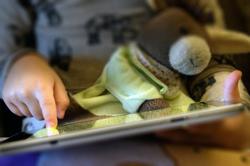 KUALA LUMPUR: The Covid-19 pandemic saw schools nationwide shifting to home-based online lessons, while working adults have been asked to work from home.

During this period, there was an inevitable surge in the use of digital technology as people and organisations adjusted to new norms in work and life.

But too much screen time can affect eyesight.

Besides gadgets, other factors can trigger eye health problems among people of all ages.

According to the World Health Organisation (WHO), cataract and uncorrected refractive errors are leading causes of vision impairment, with other causes being age-related macular degeneration, glaucoma, diabetic retinopathy and trachoma.

“Most genetically-related cases can be detected at birth or below six months old.

“Other than that, an absent red reflex where one pupil is white is a sign of cataract in infants. For babies with glaucoma, the cornea should be transparent instead of cloudy,” she said in conjunction with World Sight Day which falls on the second Thursday of October.

Dr Azlindarita said non-genetic factors usually affect premature babies of less than 32 weeks, or those who weigh less than 1.5 kg, with the risk of developing myopia high among babies with retinopathy of prematurity (ROP).

ROP is an eye disease that occurs in a small percentage of premature babies where abnormal blood vessels grow on the retina.

“The infant will be screened before being allowed to go home, particularly those who were admitted to the Neonatal Intensive Care Unit (NICU) after birth.

“Even if ROP is not confirmed, they will still be required to do yearly screening to ensure there is no problem,” she said, adding that normally this group will be screened until they are six or seven years old.

Association of Malaysian Optometrists (AMO) president, Ahmad Fadhullah Ahmad Fuzai, said gadget use among young children can affect their mental and emotional development, and expose them to risk of visual impairment.

Several local studies found that exposure to gadget screens – including the telephone and television – before age two can have a negative effect.

Citing the American Optometric Association, he said excessive exposure to blue light can damage the retina.

“Exposure to the blue light from computer screens and digital devices can decrease contrast leading to digital eyestrain, weight gain, onset or progression of macular degeneration and affect concentration.

“For children aged two to three, passive and prolonged exposure to a television screen, and without parents’ interaction, is not encouraged. As from birth to early childhood, children use their five senses to explore their world, which is crucial for brain development,” he said.

Visual impairment is also prevalent among those who have poor dietary habits and are picky eaters.

Individuals who are deficient in nutrients include people with an alcohol addiction, vegetarians, gastrointestinal surgery patients or those who suffer from an eating disorder such as anorexia nervosa.

Ahmad Fadhullah said an imbalanced diet can cause individuals to be deficient in B12, vitamin D and selenium, have a high zinc level, as well as reduced bone density and optic neuropathy, or damage to the optic nerve characterised by loss of vision.

“An individual not only faces problems with his eyesight through his food intake, but also failure to get the right nutrition could also affect his eyesight.

“Nutritional optic neuropathy is a dysfunction of the optic nerve resulting from lack of certain nutrients essential for normal function of the nerve fibres.”

He also noted that consuming medicines that are easily available online but are not approved by the Health Ministry (MOH), can have side effects on the individual’s eyesight.

“This is because unregistered medicines normally have a high steroid content for temporary relief.

“When these medicines are taken without a doctor’s prescription, it can result in acute glaucoma and permanent blindness.

“Lubricant eye drops used widely as relief for eye problems are also harmful to the consumer. Hence, the authorities should control the sale of medicines that are not approved by MOH,” he said.

Meanwhile, president of the Malaysian Society for Occupational Safety and Health, Dr Shawaludin Husin, said fatigue or eye strain faced by workers can affect body posture or ergonomics as the eyes are too focused on the screen for a long period of time.

“This could lead to other health issues when the body appears to be ‘locked’ as they have to focus on carrying out a task to the extent that people neglect the importance of having good posture. These range from back and waist pain, headache, and so on, as more time is spent staring at the screen.

“Some people suffer from sleep disorders due to the blue light from the screen that affects the hormonal balance of the body. Too much exposure to blue light at night can result in decreased levels of melatonin,” he said. — Bernama