“There are an average of 18 divorce applications filed by non-Muslim couples while 121 Muslim couples filed for separation every day.

“This works out to an average of five divorce applications per hour.

“As we speak now, there are couples filing for divorce. Isn’t this very worrying?” the Deputy Minister in the Prime Minister’s Department (Parliament and Law) said in reply to a question by Noor Amin Ahmad (PH-Kangar).

Earlier, Mas Ermieyati said more than 76,000 divorce applications were filed by non-Muslims and Muslim couples between March 2020 and August this year.

She said there were 10,346 applications by non-Muslims.

Mas Ermieyati also said there were 66,440 divorce applications by Muslim couples during the same period.

“The number of cases only involved divorce applications and does not necessarily mean that these couples ended up in divorce,” she said.

“Of course we are unhappy whenever a couple files for a divorce.

“A holistic approach should be taken to address the issue which includes counselling for those affected,” she said. 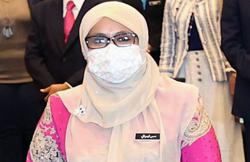