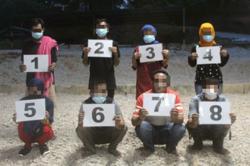 KAJANG: The main suspect in the murder of a 50-year-old Indonesian woman here has been caught, along with another man.

The duo were arrested at 10pm Thursday (Sept 30) in a house near Bandar Baru Bangi.

He added that after questioning the main suspect, the motive of the murder was due to a love triangle. Four more suspects had been previously arrested over the murder.

A remand order is being obtained for the duo.

On Tuesday (Sept 28) the body of a 50-year-old Indonesian woman was found in a closed restaurant in Bandar Rinching, Semenyih.

The woman was found naked and covered with a piece of cloth. Witnesses told the police that the victim was last seen working at the restaurant on Sept 25.