The 10 men and a woman were driving through the Amanjaya forest reserve heading towards the Temenggor forest reserve for a picnic in five different four-wheel drive vehicles.

The department’s director Datuk Mohamed Zin Yusop said the 11 people had allegedly entered the prohibited forest area on Sunday (Sept 26), and following a tip-off, enforcement officers made the arrest at 1am at the site on Monday (Sept 27).

“Initial investigation revealed that the suspects had entered the Amanjaya forest, and were heading towards the Temenggor forest reserve for the purpose of picnicking.

“All of them had committed an offence of entering the forest reserve without obtaining permission from the department,” he said.

Mohamed Zin said all the five vehicles were also seized, and a police report was lodged at the Gerik police station.

He said those who failed to apply for a permit could be charged under Section 47 of the National Forestry Act 1984, with a maximum of three years jail, and a fine up to RM10,000 or both.

“I want to inform the public that all recreational activities in forest reserves are not allowed during this period.

“Enforcement officers are often carrying out rounds in such areas,” he said.

The 11 are currently out on a police bail. 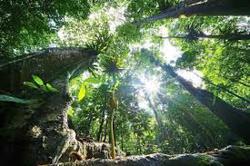