KOTA KINABALU: The state government has set up a special committee to study the problem of natural disasters amid an increase in its frequency.

Deputy Chief Minister Datuk Seri Bung Moktar Radin said the state Cabinet had appointed him to chair a committee that would review and study the causes of natural disasters, especially flash floods.

"Currently, when it rains for four to five hours, flash floods will definitely occur and we do not know the source and cause.

"So, we will carry out a study to identify and then find a solution.

"If there are measures that need to be taken, we undertake the measures that can overcome this flood problem," said Bung, who is state Works Minister, at a press conference at the state Public Works Department headquarters here Friday (Sept 17).

He said this after the signing ceremony for cooperation between the Federal Public Works Department and the state for the implementation of the Data Integration System Program for Administration, Utilization and Project Management.

Bung also did not rule out the possibility that the ongoing construction of the Pan Borneo Highway project could be contributing to the flood problems in some areas.

Bung also said that Wednesday's floods in Penampang resulted in water supply in some areas being cut off due to water treatment plants being flooded.

When a plant is submerged in muddy water, it takes some time to clean and replace damaged equipment, he explained.

"If there is damaged equipment, it will take about a month to be replaced with new ones and this equipment must be ordered from abroad. So, we hope no parts were badly damaged in the recent flood incident.

"In fact, I have also instructed the Sabah Water Department to look into this matter and we will send water tankers to ensure that the affected residents receive clean water supply," he added.

On Wednesday, three people were killed in a landslide while flooding wreaked havoc across Kota Kinabalu, Penampang and neighbouring districts.

Thirty-two people from seven families remained at the flood evacuation centre in Penampang as of Friday, as the general flood waters receded over the last 48-hours.

On Sept 3, the city and Penampang were also hit by floods that left three people dead and several buildings including wards and stores of the Queen Elizabeth Hospital 1 here were damaged by landslides.

At least five major flooding incidents have occurred this year.

On the cooperation programme with the Federal JKR, Bung said the cooperation established was good for the exchange of information systems between the Federal and state PWDs to ensure that physical development projects in Sabah are monitored more closely. 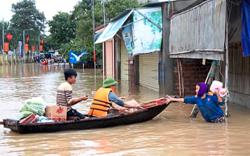 Hearing of US$340mil 1MDB-linked suit on Dec 6 and 9
Remand order extended against bomoh suspected of rape
PM: International tourists allowed to holiday in Langkawi under travel bubble pilot project
Whisky controversy: Misuse of name cannot be allowed to confuse Muslims, says Hadi
An icon is back: Jonker Walk night market set to reopen with over 60% of traders returning
Boulder dash: Motorist has lucky escape as car ends up only lightly damaged from huge falling rock
Complete vaccination for adolescents to be a condition in all SOPs soon, says PM
Penang eateries facing dire manpower shortage, hope foreign workers will be allowed back into country
PM: Johor and Terengganu to move to Phase 4 of NRP from Monday (Oct 25)
TV crew member dies after car hits his bicycle in Cyberjaya