A safe space for turtles

By Expert: Work Together To Make Terengganu Beaches Reptile-friendly 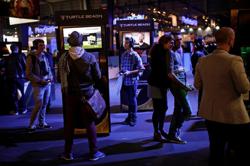 Back to the sea: A female turtle moving towards the water after laying eggs on Batu Buruk beach in Kuala Terengganu. — Bernama

KUALA TERENGGANU: The turtle landings on Batu Buruk beach signal that the reptiles are ready to lay their eggs along the 244km coast stretching from Kemaman to Besut, as well as on the resort island beaches.

“With its rapid development and close location to the city, the Batu Buruk beach is no longer a popular turtle landing location.

“When preparing to lay their eggs, turtles look out for a beach as early as 3pm and as such, noise pollution and activities on the beach in the afternoon will affect turtle landings.

“The presence of the turtles was probably because there were no public activities to distract them,” he said in a statement.

He said it was time for all parties to work together to make the Terengganu coastline a safe and friendly environment for turtles.

“There are a few things to pay attention to if we want to see turtles laying eggs on nearby beaches. Among them is to reduce the amount of lighting towards the beach.

“Turtles are susceptible to light. Therefore, do not place lighting in a high position and ensure that the lights cannot be seen from the beach. Red lighting is highly recommended because turtles are less sensitive to the light waves,” he said, while hoping that the local authorities (PBT) in each district would cooperate and take note of the matter.

In addition, he advised the public to avoid going for leisure activities at these spots and to stop lighting bonfires at the beach at night.

“The PBTs can put up notices as reminders and educate the public at selected beaches. With the financial support of corporate bodies, the PBTs could put up more notice boards and display signs.

“We also need to intensify the planting of Merambong trees around the beach area.

“According to reports, turtles prefer to lay their eggs under these shrubs as they provide shade and protection. So, even though our beaches are noisy and bright, the Merambong shrubs help give comfort to the turtles while they lay their eggs,” he said.

Yesterday, a turtle was reported to have landed on the Batu Buruk beach near Hotel Primula at about 6.50pm. It managed to lay about 50 eggs.

Terengganu Fisheries Department director Ruzaidi Mamat said they could not determine the weight and size of the turtle as it had returned to the sea by the time the officers arrived at the location.

“However, the turtle is estimated to be between 15 and 18 years old based on the size of the track and the number of eggs laid. The turtle eggs were taken to the Turtle Conservation and Information Centre in Rantau Abang for incubation.

“The public is advised not to disturb the turtles while they are coming ashore, crawling on land or moving back to sea, as the act is an offence under Section 12B of the Turtle Enactment 1951 (amended 1987) which provides a fine not exceeding RM1,000 or imprisonment of not more than six months or both upon conviction,” he said. — Bernama