"It was a normal meeting because I haven’t seen them for a while...I miss them,” he said jokingly to reporters after visiting the vaccination centre at the Islamic Civilisation Park here Thursday (Aug 12).

Yesterday, Muhyiddin was reported to have held a two-hour meeting with several top leaders in Perikatan at the Perdana Putra Complex in Putrajaya.

Meanwhile, when asked about his meeting with PAS president Datuk Seri Abdul Hadi Awang this afternoon, Muhyiddin said he just wanted to visit the Marang MP.

"Because we know that he (Abdul Hadi) has not been in very good health. I was told by Mentri Besar (Datuk Seri Dr Ahmad Samsuri Mokhtar) that he had also visited him earlier.

"It’s been a while since I last met him (Abdul Hadi)...I really hope he is healthier now so that he can continue discharging his duties for the party and the country,” he said.

Bernama’s check at Abdul Hadi’s residence in Rusila, Marang, found that the meeting of the two leaders had taken place at the residence, and lasted about an hour, but the details of the meeting were not made available to the media. - Bernama
Article type: free
User access status:
Join our Telegram channel to get our Evening Alerts and breaking news highlights 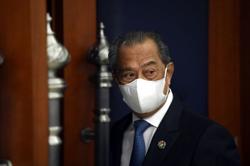