KUALA LUMPUR: Police have detained 15 individuals, including a public servant, in a raid on a party in a luxury apartment at Jalan Ceylon here.

Dang Wangi OCPD Asst Comm Mohamad Zainal Abdullah said police raided the apartment at about 1am on Thursday (Aug 5) after a tip-off.

"There were nine women and six men who were partying when we raided the apartment.

"We discovered drugs on the premises as well as a disco ball and a speaker," he said when contacted on Thursday.

All the individuals, aged between 17 and 45, are being investigated for violations of Covid-19 standard operating procedures, he added.

"Eleven of the partygoers also tested positive for drugs. 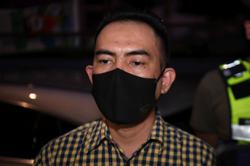