GEORGE TOWN (Bernama): A man who was previously rescued and detained for violating the inter-district travel ban for trying to swim from George Town to Sebarang Prai was again arrested after pulling off a similar stunt on Monday (Aug 2).

This time around, the man claimed that he wanted to swim to Mecca when he was rescued after being found floating in the waters off Penang island on a styrofoam float at 4.45pm by authorities who were acting on a public tip-off.

Timur Laut OCPD Asst Comm Soffian Santong said the 28-year-old man had previously jumped into the sea at the Tanjung City Marina jetty here before being rescued by marine police. He had then claimed that he wanted to go to Seberang Perai.

"The incident went viral on social media and was widely commented on, and based on preliminary investigations, the man is the same individual in the incident reported on July 12.

"He was, however, rescued by marine police and this time, he gave the excuse that he wanted to swim to Mecca,” he said in a statement Tuesday (Aug 3).

Soffian said police brought the man to the Penang Hospital for treatment and to evaluate his mental health, adding that he did not seem to be suffering from any mental issues.

The man has now been placed at the Jalan Perak psychiatric ward for further treatment while his urine test results were negative for drugs.

"He had previously been sent to a rehabilitation centre at the National Anti-Drug Agency for serious drug addition by his parents,” he said. - Bernama 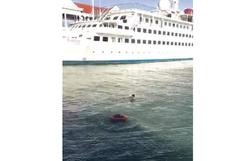