SEREMBAN: All Umno members of Parliament must stay away from being dragged into the crisis between the government and the Palace, says Datuk Seri Mohamad Hasan.

The Umno deputy president said the government’s attitude was clearly arrogant and immoral towards the King.

“Umno MPs cannot be in a position that could be construed as taking the Palace’s rebuke lightly because that is an institution which Umno has pledged to obey and defend.

“The MPs must abide by the call of the president who has asked for the Prime Minister’s resignation,” he said in a statement yesterday.

“The MPs must do so as this has been a collective decision by the party,” he added.

Mohamad said this was also in line with the voice of the grassroots during the party’s general assembly and further refined and ratified at the supreme council meeting on July 7.

“No excuse can be used to defend the government which has been seen to be clearly disobedient, reckless and have failed to carry out the orders and advice of the King.

“Loyalty to the Perikatan Nasional government cannot surpass loyalty to the King, country and party,” he said.

Following the royal rebuke over the government’s handling of the revocation of the Emergency Ordinances, Umno president Datuk Seri Dr Ahmad Zahid Hamidi had called on Tan Sri Muhyiddin Yassin to resign as Prime Minister.

He said Umno was disappointed with Muhyiddin for going against the wishes of the King for the ordinances to be debated and revoked in Parliament.

Ahmad Zahid also reminded Umno MPs of their oath of loyalty to the King and to protect the Federal Constitution at all times and told them to withdraw their support of Muhyiddin’s leadership in line with the party’s council decision. 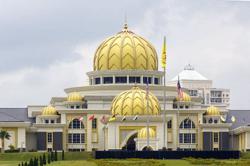