PETALING JAYA: #RasuahBusters, a movement which started in January, is now making headwaves as a moral movement backed by more than 200 organisations nationwide, uniting against the common enemy of corruption, while concurrently promoting good governance.

The Coalition of the Willing, which comprises these organisations, has been meeting from time to time to deliberate on strategies to streamline their efforts against corruption, while promoting integrity among Malaysians and across institutions.

Moving under the banner "Malaysia Without Corruption", the coalition is on the march to save the country from a “moral pandemic” that could cripple the nation if inaction continues.

#RasuahBusters core team head Datuk Hussamuddin Yaacub (pic) said “recovery from the symptoms” of corruption must be done holistically by taking into account the views of each coalition partner, who are experts in the segment of their respective target groups.

"I am in high spirits and spurred on by the support received from every spectrum of the public, including the youth, who are so committed to ingrain integrity into their belief system.

"Although the journey of #RasuahBusters has just begun, I pray that any act of corruption can never again be hidden by anyone," he said in a statement Saturday (July 24).

#RasuahBusters and its coalition partners are organising various programmes to reach its objectives and are calling for interested parties to join them.

For a full list of the organisation in support of #RasuahBusters, or to find out more information, visit its website at www.rasuahbusters.com. 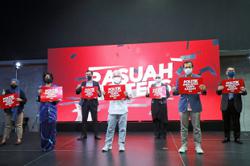