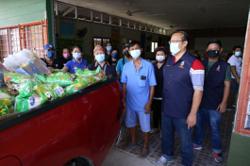 KOTA KINABALU: Setting aside political differences, both government and opposition politicians worked together to bring food baskets to the people.

The Kapayan Community Development Leader Unit (UPPM) office witnessed the handing over of 500 food baskets from the office of the Penampang MP to the Kapayan state constituency at Dewan Koidupan in Penampang.

The food aid was from the allocation of RM300,000 announced by Prime Minister Tan Sri Muhyiddin Yassin last month to MPs to carry out the food basket programme, where essential supplies will be distributed to affected constituents.

According to Sabah MCA chairman and Kapayan community development leader Lu Yen Tung, the 500 food baskets from the Penampang MP’s office were for distribution to 10 villages in Kapayan that were identified by the MP’s office.

Lu said putting aside political differences was important as the lives of the rakyat was now the priority.

At the same time, Sabah DAP’s Kapayan assemblyman Jannie Lasimbang also received food aid from the Penampang MP’s office to be distributed to her constituents.