KUALA LUMPUR: The Federal Territories Ministry is looking to give RM100 in cash aid to some 4,000 hardcore poor families in the city for a period of three months starting July.

Minister Tan Sri Annuar Musa said this aid would replace the Federal Government's food basket initiative that had previously been given an RM300,000 allocation.

“We made this decision because we found that some recipients did not need certain items that were included in the food basket.

“With the cash aid, recipients could shop for specific food items they needed at selected supermarkets,” he said on Thursday (July 8) during a press briefing at the Grand Seasons Hotel in Jalan Pahang.

Annuar also announced that the four-star premises would cater to various services related to the control of Covid-19.

One of the services, he said, was to serve as a venue to vaccinate the homeless in the city, adding that 300 had been vaccinated so far.

“Out of that figure, some 150 have received two doses of the vaccine.

“We are also looking into providing a walk-in vaccination service for traders in nearby markets such as Chow Kit and Pasar Raja Bot,” he said.

The minister added that the hotel would also host a kitchen to cook and distribute food for frontline workers and needy households.

The initiative was launched by the Minister in the Prime Minister’s Department (Religious Affairs) Datuk Zulkifli Mohamad Al-Bakri to feed the poor.

Annuar said that his ministry, via the Yayasan Wilayah Persekutuan (YWP), would foot the operating costs at the 300-room hotel.

“This centre will be managed by a group of non-governmental organisations, led by the YWP,” he said. 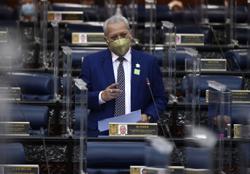