Two repeat drug offenders nabbed with drugs worth over RM5,000 at Bahau roadblock Jempol OCPD Supt Hoo Chang Hook said the suspects, both aged 39, were behaving in a suspicious manner when their Proton Persona car was stopped at the roadblock at 2.30pm.

Upon inspection, police found various types of drugs near the handbrake and seized two small packets of heroin weighing 110.5g and another two packets containing 13.25g of crystal lumps suspected to be syabu, all worth RM5,193, he said in a statement here on Friday (June 25).

Supt Hoo said both suspects were tested positive for drugs and have previous records related to drugs.

He said they were taken to Simpang Rengam and Batu Gajah Rehabilitation Centre respectively to undergo detention under the Dangerous Drugs Act (Special Preventive Measures) Act 1985 for two years.

They were also compounded RM5,000 each for violating the Movement Control Order standard operating procedure committing the inter-state offence.- Bernama 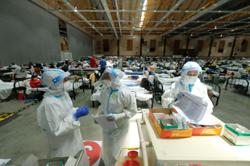