PETALING JAYA: Vaccinating the Tok Batin (village chief) will spur confidence among those in the Orang Asli community to get their Covid-19 shots, says the Rural Development Ministry.

Its Deputy Minister I Datuk Seri Abdul Rahman Mohamad said that 26,469 Orang Asli in the whole country have agreed to get vaccinated so far.

He said that since initiatives targeting vaccination for their village chiefs began in earnest, he noted that there was an 11,000 increase among the Orang Asli community who have agreed to get the jab, compared to 10 days ago.

“The Tok Batin can be considered as frontliners for the Orang Asli community.

“We have also had our agencies go down to the ground to give explanations to the community and in the end, there is a very noticeable increase in the numbers of those who agreed to take the vaccine,” he said in a press conference at the Hospital Orang Asli Gombak on Saturday (June 19).

He was there to oversee 60 Orang Asli who received the Pfizer vaccine, 27 of whom are Tok Batin.

“There were a few Tok Batin just now who told me that they would go back to their village and convince their villagers to receive the jabs after this.

“We believe that the villagers will be more open to getting the shots when they see their Tok Batin getting vaccinated,” he said.

He also said that outreach programmes have already been launched in other states such as Pahang and Johor, while he will also travel to Perak and Negri Sembilan to launch similar initiatives.

Abdul Rahman also noted that the authorities will make transport arrangements for Health Ministry officials to go to remote areas in order to vaccinate the Orang Asli community.

“In these villages, there are those who have disabilities, those who are not feeling well, those who are elderly, or those who do not have their own transportation. We want to help them by going to the ground.

“The Prime Minister has asked for us to modify vehicles to transport the vaccines at their specific storage temperatures. We cannot say when these vehicles will be ready but we hope that we can deploy them in July,” he said.

He revealed that to date, 82 Orang Asli had tested positive for Covid-19 and three had died of the illness. 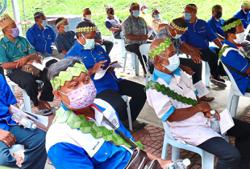