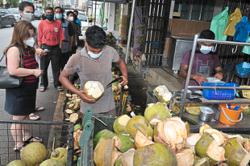 MELAKA: The Chief Minister wants an immediate investigation into claims that a vegetable stall owner had cut off his pink Covid-19 quarantine wristband and went to work at the main wet market, triggering a chain of infections that led to 15 positive cases.

"I view the allegation as a serious matter," said Datuk Seri Sulaiman Md Ali on Monday (June 14), adding that he wants the relevant authorities to investigate.

The market at Jalan Tun Fatimah here had been ordered to close for three days starting Monday after 15 traders tested positive for Covid-19.

Kota Melaka MP Khoo Poay Tiong, who visited the market on Sunday (June 13), said some traders alleged that one of the stall owners removed his wristband and came to the market.

"Punitive action must be taken for this selfish act if the allegation is true, " he said when contacted.

Khoo said more than 100 close contacts had been asked to go for swab tests and he expected more to be called up for testing soon.

"It's sad that it has to close, purportedly due to the irresponsible act of one stall owner, " he said.

"We will alert the Health authorities if the allegation is found to be true, " he said.

Zainal said sanitisation work was currently being carried out at the market, as well as screening tests on traders and workers.

Melaka Tengah OCPD Asst Comm Afzanizar Ahmad said no report had been lodged against any trader at the market.