Dwindling habitat: The dusky leaf monkey, or spectacled langur, are shy primates and prefers the sanctuary of the forest rather than the environment of human settlements.

PETALING JAYA: There were 220 complaints received by the Wildlife and National Parks Department (Perhilitan) from the public on dusky langurs last year.

They also involved one human death and two cases of injury.

In an infographic shared by the department on Instagram, it said between 2016 and last year, there were a total of 849 complaints against dusky langurs, which are also known as dusky leaf monkeys or lotong.

At the same time, a total of eight people were wounded in attacks, including four people in 2016.

The infographic came in the wake of criticisms against the department over the culling of a troop of dusky langurs in Port Dickson last month.

In an earlier statement, Perhilitan said it had been forced to cull seven adult dusky langurs in an operation in Port Dickson as these animals had caused serious injuries to humans on three occasions this year.

The department said all seven monkeys were aggressive and had to be put down after attempts to trap or relocate them had failed.

It also rubbished claims on social media that 20 dusky leaf monkeys were shot and killed in an operation at Batu 2, Jalan Pantai, on May 19.

“There were no juveniles culled in the operation as mentioned in the viral reports,” it said, adding that the most serious incident was reported on Jan 21 when a woman was bitten and had to be treated at Hospital Port Dickson.

Perhilitan also said it had considered several options but eventually decided to cull them.

Its decision is in line with provisions under the Wildlife Protection Act, which allows it to get rid of any wildlife that causes harm to humans or property.

However, the Malaysian Primatological Society and Langur Project Penang had said such drastic action was unnecessary as aggression by dusky langurs, protected under the Wildlife Conservation Act 2010, was extremely rare.

They said dusky langurs were an extremely shy and gentle primate, and under normal circumstances, preferred the sanctuary of the forest rather than seeking to be near human settlements, unlike macaques. 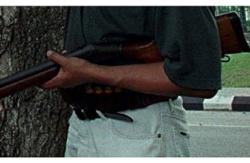