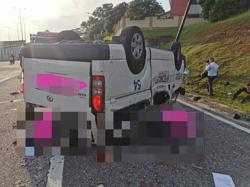 JOHOR BARU: An accident involving nine Nepali security guards left one of them dead and the others seriously injured, with the local driver also killed.

The van they were travelling in skidded and turned turtle near the Eastern Dispersal Link Expressway (EDL)-Jalan Stulang Darat intersection here at 7.45am yesterday.

The deceased guard, believed to have been seated in front, was thrown out of the van due to the impact of the crash.

“It is believed that the driver suddenly lost control of the van, causing it to crash into the left side of the road, ” ACP Mohd Padzli said in a statement yesterday.

He appealed to witnesses to step forward to help with the investigation, adding that they could call Traffic Investigation Officer Insp Hafiz Jaafar Mad Ariff at 017-591 9208.

He said the case was being investigated under Section 41(1) of the Road Transport Act.

“We will also check whether the vehicle had carried passengers within the allowed limit under the movement control order 3.0, ” he added.

The identities of the guards have yet to be ascertained. 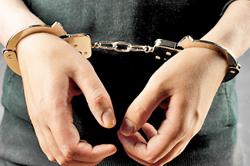